We've released updated numbers on the size of our local innovation economy and they're pretty remarkable: jobs are up by 45% and the annual economic impact is more than $5 billion. DUMBO continues to drive a lot of the power here - with lots of new jobs filling up DUMBO Heights and Empire Stores. The economic impact of the Brooklyn Tech Triangle’s innovation economy is projected to more than triple in the next ten year would provide an opportunity for nearly 18,000 additional jobs and $4.8 billion in further economic impact. The full report is available at http://brooklyntechtriangle.com. 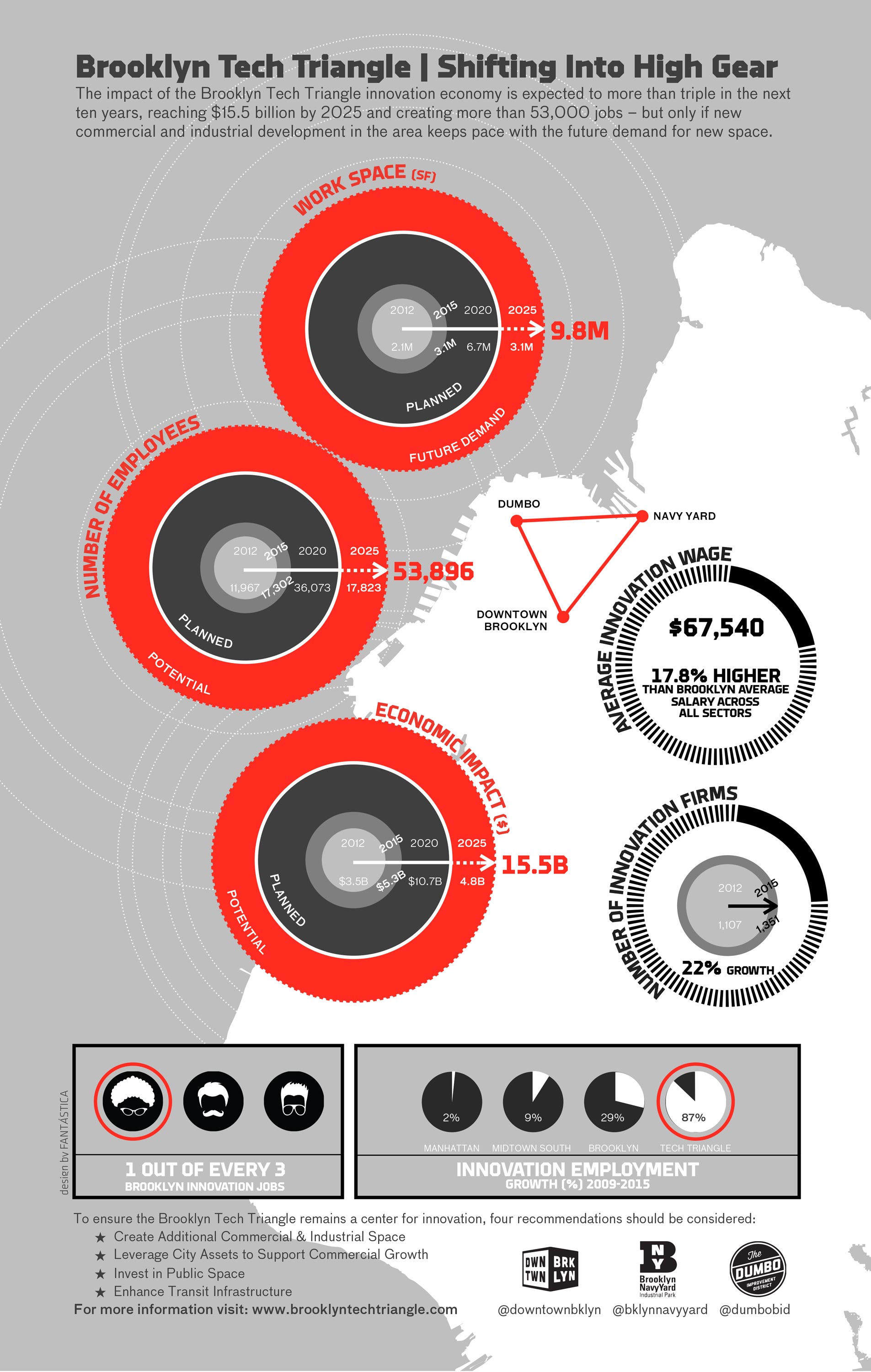 “In DUMBO, we’ve seen a lot of growth from our major companies like Huge and Etsy. They’ve all chosen to double down, growing their workforce here in DUMBO. We get firms coming in from Europe and the West Coast and many firms migrating from Manhattan to Brooklyn. A Brooklyn location helps attract top talent and clients,” said Alexandria Sica, Executive Director of the DUMBO Improvement District. “It’s so important that we capture as much of this growth as possible and the key right now is to keep adding more space.”

Comprising Downtown Brooklyn, DUMBO and the Brooklyn Navy Yard, the Tech Triangle is now home to 1,351 innovation companies and 17,302 employees, up from 1,107 and 11,967 in 2012, respectively. That growth was spurred by companies like Etsy, Huge, and MakerBot, along with startups like goTenna, Honeybee Robotics and Sartorous, as well as academic expansion from local universities like NYU Tandon School of Engineering and New York City College of Technology. The report projects more than 53,000 employees by 2025, if future demand for 3.1 million square feet of office space is met.

The total economic impact of the Tech Triangle has also grown significantly, from $3.5 billion in 2012 to $5.3 billion in 2015. And that growth is expected to skyrocket to $15.5 billion by 2025. That growth, of course, will be accompanied by increased demand for office space, which is already scarce throughout the Tech Triangle. Since 2012, the total stock of office inventory increased only by 1.2% – despite important additions like 41 Flatbush Avenue and the Macy’s site in Downtown Brooklyn, the DUMBO Heights and Empire Stores projects in DUMBO and the Brooklyn Navy Yard’s Dock 72, Building 77 and Green Manufacturing Center. If the innovation sector continues to grow at its current rate, much of the Tech Triangle’s commercial space will be absorbed by 2020, the report says.

Given the projected accelerated demand for that office space, the report argues that the growth of the Tech Triangle – both in terms of job creation and economic impact – hangs in the balance.

The report makes four recommendations to ensure that the Tech Triangle remains a world-class center for innovation and resource for New York City:

The city should consider revisiting land-use policy within the Tech Triangle to incentivize the creation of new commercial office space. Much of the growth in the past few years has come from adaptive reuse projects (Empire Stores, DUMBO Heights); however, very few opportunities remain for adaptive reuse to increase the stock going forward. New construction of office space must be realized to accommodate future growth. One possibility: expand the Special Downtown Brooklyn District.

Roughly 1 million square feet of public transit-rich, underutilized government-owned space could be repurposed for office space and infrastructure like public schools to support the area’s growth.

The City should continue to support the Brooklyn Strand initiative, an effort to reimagine and better link more than 40 acres of disconnected public parks and plazas that run from Brooklyn Borough Hall to Fulton Landing and parts of the Brooklyn-Queens Expressway, repairing the mistakes of urban renewal that alienated communities from each other decades ago. These public spaces abut many potential development sites and their transformation is key to making the creation of new office space attractive and viable. The report praises the New York City Economic Development Corporation’s Willoughby Square Park in Downtown Brooklyn, expected to begin construction in 2016.

Additional transit is needed to link emerging innovation job districts along the Brooklyn-Queens waterfront, which would also help spur the creation of new office space. A solution which could complement existing subway lines, augment new ferry service and be supported by initiatives like Citi Bike merits further study by the City.

One reason for such strong demand across the Tech Triangle: Downtown Brooklyn has increasingly become an attractive place for tech, thanks to a burgeoning ecosystem that fosters the innovation economy’s growth and bolsters its potential. For example, the recently formed Brooklyn Education innovation Network, a consortium of 9 institutions of higher education focused on building academic and industry partnerships and creating a robust job and internship pipeline with local businesses. A study in coordination with the Tech Triangle update found that those institutions contribute $2.8 billion to the local economy annually. Other improvements in the district since 2013 identified in the report include the creation of the Brooklyn Cultural District and addition of free public WiFi, among others.